“A mountain of garbage sat in the middle of the ‘patio’, (the courtyard central to the prison.) It literally stewed in the sweltering heat and sun. It moved with maggots and rats. Sewage in each cell was a filthy hole in the floor with a constant parade of cockroaches and rats coming from it. The prison had been built in the late 15th century, and designed to house a maximum of eighty prisoners. At no point were there fewer than two hundred and fifty. The youngest prisoner was a eight month old baby.

There was no fresh water provided, but bottled water could be purchased if you had money. There were murders, self-mutilations and suicides every day.

Virtually all the inmates were armed with home-made knives, hatchets, and clubs. The noise was relentless: constant fights, screaming, gunfire and the clanging of steel doors. Arabic music shrieked distortedly from cheap radios.

Day and night there were bursts of machine-gun fire and shotgun blasts from the guards who occupied the walls surrounding the prison. Anyone who approached the prison had shots fired at them, including my friend, a criminal lawyer, who had come in a vain attempt to help me.

This was my reality. ‘Why?’ I constantly asked myself. Because I trusted a friend. Because I had faith in the justice system. Now I had to adapt or die.”

Gerry Griffin was born in Vancouver in 1948, the son of a WW II veteran who later became a nuclear physicist. The Griffins relocated to Deep River, Ontario where Griffin’s early passion became music. He started his first rock and roll band at age fifteen and has had a band ever since.

Griffin moved to Toronto in his late teens and then on to settle in Ottawa with his wife and two daughters. He became a successful real estate developer by day and a bandleader by night.

During the winter of 1991, Griffin’s childhood pal asked him to go with him on a vacation to Europe and North Africa. Griffin was recently divorced after twenty five years of marriage, and thought it might help him deal with his loneliness. Without much thought, they ran out and bought the tickets.

When the time to go came a few months later, Griffin was hesitant. He’d met a new girlfriend and had built up his real estate holdings to 13 houses with 35 rental units. “I thought, ‘Oh well, it’ll be fun’,” Griffin remembers.

After a wonderful few weeks motoring from Holland through Spain into the hills of Morocco, the two men were heading back to Europe.

They planned to cross the Mediterranean Sea on the Melilla-Malaga ferry. Although on Moroccan soil, the city of Melilla is a free port under Spanish rule.

During a customs inspection of the van rented by Griffin’s friend, 68 kilos of hashish was found hidden in the roof of the truck. Griffin’s friend immediately admitted ownership, and explained that Griffin had absolutely no knowledge of its existence. The Spanish magistrate promised Griffin his release within a week or ten days.

In 1971, Griffin had been arrested in Toronto with a small amount of hashish. The courts gave him a suspended sentence and eventually he applied for and received a full pardon. Twenty years later, at the request of the Spanish courts, a report of the earlier drug charge was accessed by Interpol.

Officials quickly concluded that if Griffin had been charged with a narcotics offense in the past, most certainly he must now be guilty. No regard was taken for the fact he had received both a suspended sentence and a subsequent pardon.

Their trial had lasted ten minutes and was conducted completely in Spanish, a language not understood by either of the Ottawa-based pair. This was completely contrary to both international and Spanish law, yet no one offered any assistance including the Canadian Embassy, Spanish authorities or the United Nations.

Pleas directly to the Canadian Ambassador were stonewalled because the pair were charged with drug offenses. Common to the plight of most of the world’s drug prisoners, economics and politics took precedence over humanity.

Both Canadians were sentenced to 8 years, four months and one day in a third world prison, described to Griffin by the United Nations Committee on Human Rights as “one of the worst five prisons in the world.” 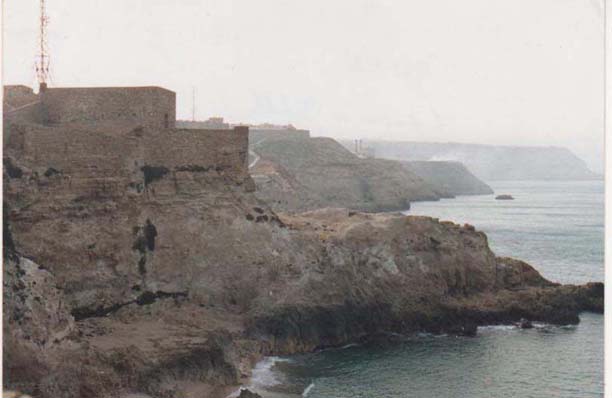 This is the prison in Melilla. (The picture was taken by a friend of Griffin’s who visited him there.)

“There’s a prison on the coast of Africa. / The people there suffer a lot of pain. / Inside this ancient tomb I sit in Africa, / Tears of stucco fall on me like rain.”

– Melilla from the album “Hour Glass” by Gerry Griffin

“My first task at hand was to learn two languages,” explains Griffin, “Spanish to communicate with the Europeans and guards, and French to communicate with the Africans and Arabs. The second was to provide myself with an income. I found a copy of a ‘How to Draw’ paperback, and within a month I’d taught myself to draw portraits of the guards and inmates for money and favors.

“The money I generated by drawing these portraits, and the fact that I sang and played musical instruments (guitar and harmonica), immediately vaulted me into a position of power on the patio. I wrote over two hundred songs, and through my music was able to forge alliances with other prisoners who helped to teach me the ‘con code’ of survival,” remembers Griffin.

“There was an incredibly macabre irony in spending time in a hell dominated with both soft and hard drugs, for hashish that wasn’t even mine, in a country where smoking cannabis and hashish is commonplace in any local coffee shop, and where the national economy is fueled by the narcotics trade. A facade is maintained for other governments and the United Nations that there is an active campaign against drug traffickers. I met former Moroccan judges, politicians, and lawyers in prison, with tales of corruption and drug trafficking at the highest levels, in both the military and the government.”

Both Canadian and Spanish officials ignored Griffin’s requests for justice, after being illegally and falsely convicted and incarcerated. The United Nations position was that they would not review any case unless all other domestic avenues had first been pursued. Griffin wrote pleas to all levels of the Spanish Courts, the different branches of Government, the Ombudsman, and even the King of Spain. Knowing his correspondence had been destroyed in the past by prison officials, Griffin paid with portrait earnings to have his letters smuggled out of the prison and posted. “With a sense of relief, I was finally notified that the United Nations Committee for Human Rights in Geneva, Switzerland, were willing to examine my case. However, under United Nations regulations, Spanish officials, my captors, were allowed full disclosure of my accusations against them. I often wondered if my jailers would retaliate or shut me up once and for all.”

The United Nations ruled in Griffin’s favor, and he was awarded financial compensation for “cruel, inhuman, and degrading punishment.” The decision was completely ignored by both the Spanish and Canadian governments. Griffin remained in prison.

As the first year passed in Melilla, tension began to mount in the prison. The heinous conditions and barbaric treatment by the guards finally caused the prison population to rise up and riot. The ancient dungeon was set aflame and convicts destroyed all they could. The military was called in to intervene, and all Melilla prisoners were separated into numerous prisons throughout Spain. Griffin was transferred to a new super-max prison with a population dominated by Basque terrorists in Seville, Spain.

In 1993, as a direct result of Griffin’s United Nations case against the Kingdom of Spain, Melilla Prison was closed. Meanwhile, Griffin had been identified as a ringleader of the riot at Melilla, and sentenced to a further nine years in prison. He now was facing seventeen years in prison, a world away from his home and loved ones, for a crime he didn’t commit.

After twenty-one days, he was transferred to a prison outside of Malaga, Spain, his original ferry destination at the onset of his Spanish nightmare. He was detained in a prison infirmary ward housing AIDS patients. After just over sixty days he contracted pneumonia and was given days to live. It was on Griffin’s deathbed that he composed the following: 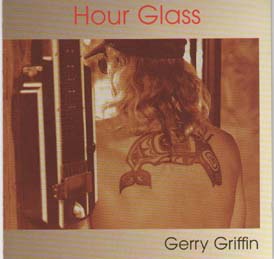 Griffin had found the inspiration to re-start his battle for not only his freedom, but now his survival. He gave up the hunger strike after sixty-eight days, after losing over forty pounds and the ability to walk for three months. Griffin re-focused his efforts on petitioning the United Nations. His promise to himself was first, not to give up his battle for liberty.

Back home, to jail

Finally, Griffin became aware of provisions in the United Nations International law, which allows prisoners to serve their sentences in their own country, if it is deemed the prisoner’s home conditions are less harsh.

After years of interaction with both the United Nations and the Canadian Embassy, why had no one had ever mentioned this program?” asks Griffin in disbelief. Within months, after just under three years of imprisonment in Spain, Griffin was heading back to Canada.

Once back in North America. Griffin abruptly had to face bankruptcy, the reality of his divorce, lengthy separation from his loved ones, and more prison. Canadian officials would not review his case, in spite of the UN decision, the fact he was clearly illegally tried, as well as his being not guilty in the first place. Instead, his sentence was transferred to the Correctional Service of Canada.

Griffin spent the next fourteen months incarcerated in Millhaven Maximum Security, Frontenac Minimum Security, and an Ottawa halfway house. He will be on Federal parole until late 1999.

As soon as Griffin returned to Ottawa, he began to pursue his dream of a career as a musician. He recorded a demo-tape containing a handful of songs composed in Spanish prison. A friend sent the tape to a New York based, world renowned music producer named Jeffrey Lesser. Lesser received his notoriety by recording such acts as Barbra Streisand, Lou Reed, The Chieftains, Sting, and Sinead O’Connor. Lesser was so impressed with Griffin that he came to Canada and produced Griffin’s first CD, “Hour Glass.” 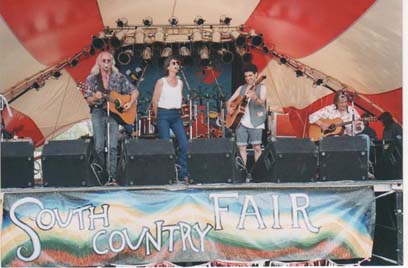 Griffin and his mate, manager, and backup singer, Heather Houston – shown here performing at the South Country Fair in Fort McLeod, AB with singer/songwriters, Ben Sures and Joe Hall – are now on a coast to coast Canadian tour. Playing music and fulfilling his promise to himself from a Spanish hell, Gerry Griffin is sure to become a dominant force in the Canadian music scene.

He still maintains considerable bitterness with the Canadian government for not assisting him and prisoners like him abroad.